This unit of the guide, called Starting Out, covers the most basic and common parts of Sanskrit grammar. Consider the first two verses of the Bhagavad Gita:

By the end of Starting Out, you will be able to read all of the highlighted words in Devanagari (or IAST, if you like), understand their meanings and use, and perfectly explain how they are formed. Pause to realize how remarkable this is: in just a few lessons, you will perfectly understand everything there is to know about these words.

But of course, you will be able to read much more than just a few words! As we develop our Sanskrit ability, we will start to read lines and sentences from many sorts of Sanskrit texts.

As mentioned earlier, a thorough understanding of the sounds in Sanskrit is vital to understanding Sanskrit itself. Sanskrit's vowels and consonants are all involved in regular and ordinary changes that can significantly alter the meaning of a sentence. These changes are all part of a larger set of rules, which is simply known as Sanskrit's grammar.

If you already know what "grammar" is, you can skip this paragraph. But if you do not, I will explain it now. "Grammar" refers to the rules and patterns of a language. Grammar describes both how words are made and how words are put together. Grammar also describes what words mean when they are put together, and it describes how certain combinations of words create new meanings. After all, a language is a way for us to express and share our ideas. Without some common rules and patterns, it becomes hard to understand what another person says or writes. Words that follow the rules of grammar are called grammatical.

Still, what is meant by "Sanskrit" grammar? What makes Sanskrit different from languages like English?

An Overview of Sanskrit Grammar

So, we have subjects, verbs, and objects. In a typical English sentence, the subject comes first, the verb comes in the middle, and the object comes last. We can say that English is mostly in "subject-verb-object" order, or "SVO" for short. Other SVO languages include Arabic, Chinese, Finnish, Russian, and Thai.

Let's look again at the example above and compare the English and Sanskrit versions of the sentence:

We can rearrange the Sanskrit words above in any order we like; our result will still be a grammatical sentence. Let's rearrange the words in "Elephants eat fruits" and see how English and Sanskrit react.

Notice that the English example loses its meaning when we rearrange the words. In fact, the new sentence is completely different! The subject has become the object, and the object has become the subject; this makes it look like the fruits are the ones doing the eating! But in Sanskrit, it's OK to rearrange the words in a sentence, at least most of the time. In this sentence, the original idea of elephants eating fruit still remains.

Now we have two questions to consider:

When we change the order of words in a Sanskrit sentence, the original idea is still there. However, the first word of a sentence usually has the most emphasis, meaning that it's the word we should pay attention to the most. Consider the two sentences below. Both sentences use the same words. The difference between them is that they use different word orders. The word order slightly changes the meaning of the sentence.

Word order acts similarly in other Indo-European languages, like Greek. Consider the first lines of the Iliad and the Odyssey, the two main Ancient Greek epic poems. 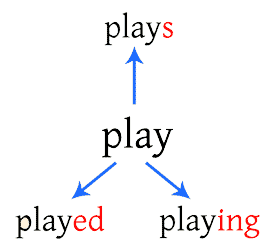 The word "play" and its behavior in English.

Inflection is the way a basic word starts to carry more information about what it means in a sentence. We inflect words by taking smaller words and slightly changing them. English does not have much inflection left, but we can still see it in some places.

It is important to realize that an inflected word is still one word. Sanskrit, like most Indo-European languages, uses inflection to a far greater extent than English does. In Sanskrit, a complex idea can exist as one word and still carry a single and precise meaning. For example, ideas like "from the two villages" (Sanskrit grāmābhyām) and "they will want to go" (Sanskrit jigamiṣiṣyanti) are each inflected versions of simpler words (grāma, gam).